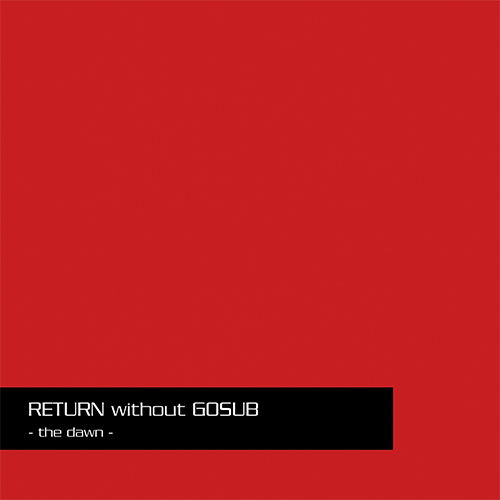 Available at the following stores

“To express the meaning of the album “The Dawn” by Return Without Gosub is like trying to manage the importance of Wolfsheim’s contribution to synthpop scene. Hard to say…

Nobody would expect from less known Spanish boys such a positively successful result. The profundity of their attack now actually is stonkering! Unexpectedly but surprisingly so.

Delving into the depths of the album you will find a bursting quality of production, delivered by two long time friends Alejandro Guerrero and Jose Manuel Gonzalez.

Despite the fact that duo has 100% independently gave birth, produced and recorded “The Dawn” in its present form, this form shines with abundance of marvelous passages and to-remember-well musical chronicles.

Definitely, since Blind Before Dawn and Thought Criminals the European dark synth-tech-gothika wasn’t so charming and delicious. Took off from the arsenal of goth-EBM and Darkwave cyber-spaces the better weapons for the club dance-floors’ assault, Return Without Gosub professionally used it on the “The Dawn” missile.

Pulsating synthetic F242 body celluloid, harshly thoughtful romanticism of Mesh in the power of NIN and Nitzer Ebb, enchased by the vassal-like homage to Bjork. All of that is being prepared by the light-cold scalpel of distortion and then warm harmonious spurts come streaming easily, beating up against the dancing motives among the decorations of industrialism.

Right here and right now, RwG fully resurrects the insights of Chris Vrena that he had upon the future of underground culture.”

“I’ve been a bit late in reviewing this album – it’s been in my car for the last month, and I forgot that it needed reviewing. I’ve been busy listening to it, and as it’s so easy to like, that’s why it’s stayed in the CD player in my car for so long… So that should give you some sort of heads up on this release.

Return Without Gosub are a Spanish EBM/Electro/Goth band – their words not mine, but the music does have some Mediterranean feel to it, and I’d have to
agree with the way they have labelled themselves. This is a fully electronic album, but with dark overtones, and a pounding EBM beat. From the off (track one – ‘Sheroine’), the male vocals coupled with a dynamic and rolling sound entice you in, and invite you to stay the course of the album.

The second track, ‘Vampire’, relies on electronic vocal distortion, and this creates a very ‘cyber’ feel to the track, if not, then a very close resemblance to  mainstream club culture. ‘Obsession’ picks up the beat – a pounding Industrial number, dealing with the animal instinct within us more. Listen out for the distinctive sample and you’ll see what I mean. The Goth/EBM theme continues throughout the album, until we hit track 7, ‘embryo state’, which really is the dirtiest and noisiest track here.

Frantic, with dirty guitars and pounding beats, this really is good stuff.

Every album should have an ‘odd’ track on it in my mind, and RWG give us ‘homage to Bjork’, which is a tad ‘out there’, in terms of structure and direction. This is very odd, and almost out of character with the rest of the album.

But it’s not all fast paced EBM and rolling loops, as can be heard on the ballad-esque ‘Overside’, a passionate and melodious track, brimming with outpourings of emotion. Very powerful, lyrically at least. Female singing comes to the fore on the opening for the track ‘Psycho Lover’ – and it’s here in my mind that the album steps out of the Electro/EBM/Goth framework, and into the mainstream dance scene. Even with the male vocals taking over later on, this track has ‘mainstream’ written all over it.
The same can be said for ‘Euphoria’ –another 70’s inspired disco/funk affair brought screaming into the 90’s dance scene. A good track, but not in this scene. Sorry, this kills the work already done by the preceding tracks. The last two tracks are mixes – ‘Lying Girl’ and ‘Vampire’ – both very good, but seem to be the original tracks with some more electric beeps and loops. Nothing to overly set the world on fire here.

If you ignore the two dance inspired tracks, this is a very good album, but the inclusion of material that does not fit the scene for which this album was aimed at, kill it, and make it incomplete. This is a shame as there’s some good stuff on here, and if RWG can re-focus a little on their direction, then they have the makings of a great band.”

“We already discovered the last years a few cool Spanish bands like Lethargy, Culture Kultür or the less familiar Bubble Gum. We here now get a new interesting formation, which is hailing from Madrid. RWG has a very particular and eclectic style, combining outstanding bass lines of the EBM together with a half spoken gothic way of singing and a few techno elements as well. It’s a real strange mix, but the less I can say is that it works pretty well. The opening song entitled  “Sheroine” is an excellent illustration of their open-minded way of composing. I really love the clear, half spoken male vocal parts. The structure is a real kicking piece of EBM till hard guitar riffs join in. Well, it all sounds a bit strange, but you get rapidly used to it. The singer has a surprising potential, which goes much further than only singing a half spoken way. The “Overside”-cut illustrates his vocal capacities, while the music remains here quite gothic and moody. In a more electronic approach, the “Pleasure day”-song is another interesting item. I’ve been impressed by the elaborated bass line, which is pure body sensation. With the “Homage to Björk”, they probably reveal some source of inspiration, while the song moves into modern trip hop rhythms and some other efficient dance lines. The 2 last songs are remixes by Modular Heaven and Xavier Rios, which aren’t the best exponents of this album, but still credible pieces! I would not qualify this Spanish formation as a new sensation, but their album is more than simply enjoyable. You can hear that there’s a real potential even if their sound is a little bit controversial!”